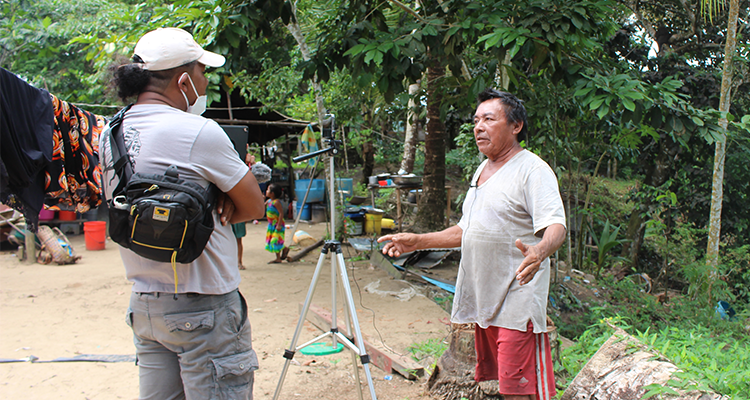 The Amerindian Peoples Association (APA) under the Amazonia 2.0 project recently conducted an environmental field monitoring activity in the Potaro-Siparuni Region (Region 8), where a team from the organisation spent three weeks collecting pertinent data from the seven communities that are a part of the project.

The team comprised APA’s GIS Specialist and Forestry Policy Officer Mr Michael McGarrell, Communications and Visibility Officer Ms Mariah Lall and three monitors- Kemal Robinson, Lucious Torres and Orlando Andrews. Among the communities visited by the team was Micobie Village which sits on the right bank of the Potaro River in Region 8. Micobie, like many other Indigenous communities, faces constant threats to its land as a result of illegal mining and have been left to cope with polluted rivers and other forms of environmental degradation as a result of river mining.

During the visit to Micobie, residents expressed concerns about illegal mining taking place on their titled lands. As a result, APA’s team, accompanied by a councillor of the Micobie Village Council, visited the most recent site affected by illegal mining. As the team closed in on the area, four, hydraulic dredges (Dragga), were seen working on village land. However, as they approached, the dredges (Dragga) and several workers retreated to the other side of the river. Nevertheless, the team was able to capture drone videos of the Draggas being towed away from the worksite. They were also able to photograph two excavators, which were used to clear the riverbank of its natural vegetation, hidden by the miners in nearby bushes.

This instance of illegal mining was also highlighted on social media by the APA and subsequently followed by Stabroek News, a local media house. The APA, through its Facebook page, published pictures and drone footage of the situation on the ground. After consistent media attention, a team from the Guyana Geology and Mines Commission (GGMC), the regulatory body for mining in Guyana, visited and issued removal orders to the miners and instructed them to refill the land. However, it has been reported that the miners continue to be defiant of the order, leaving Micobie to fight what will most likely be another uphill battle, all while their lands continue to be destroyed and their waterways polluted. 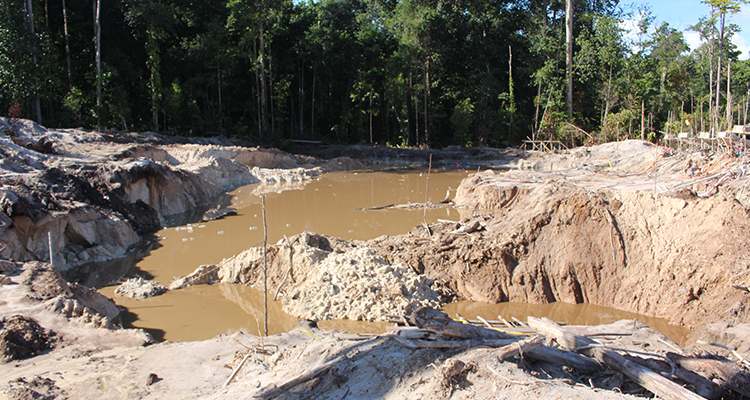 Isaac Williams, a resident of Micobie who spoke with Mr McGarrell, explained that he has been living in the community for over 60 years and has witnessed the pollution of the river caused by continuous river mining. He noted that though reports have been made to the relevant authorities, the community has seen little change. Mr Williams explained that the Potaro River was once home to an abundance of fish which sustained the community and fishermen like himself. However, this has changed as fish is now scarce, something he attributes to the river mining taking place in the Potaro River.

“We got the big Potaro River with polluted water; Tiger Creek, our boundary line is also polluted…It is affecting us because we are not getting our fish anymore. Even if you tie a seine now you can’t catch anything, sheer moss coming up on the seine,” Mr Williams shared. “It is hard, especially for me because I use to go fishing, but I can’t do that anymore,” he added.

Meanwhile, in Karisaparu, another village under the Amazonia 2.0 project, the APA’s team met with Mamai Lucille, an elderly Patamona woman, who, over a year ago was forcibly removed from the land she lived on for more than 80 years after miners laid claim to it. As reported by the North Pakaraima District Council (NPDC), the miners had cruelly chopped down Mamai's house post, threw her belongings out of her home and destroyed her farm.

Though there had been some intervention by the former Minister of Natural Resources Mr Raphael Trotman after Mamai’s situation was highlighted by local media outlets, her situation has remained the same.

At the time of the Minister’s intervention, the miners were instructed to rebuild a house for Mamai. However, the structure which was seen by APA’s team during the visit to Karisaparu, can only be considered a shed, which leaves her exposed to the elements.

Mamai also explained that the miners are once again trying to force her to relocate. However, she made it clear that she has no intention of being pushed out by the miners. She also spoke about the sadness she experienced having had to witness the destruction of her fruit trees which had been around since her days as a child.

Additionally, the team also visited Campbelltown Village, located on the outskirts of the Mahdia Township in Region 8. In mid-September, the village experienced a gold rush which saw thousands flocking the area known as S-Bend, to extract the gold deposits discovered there.

However, the site was subsequently shut down by the GGMC until the community can implement specific safety measures. While visiting the area, the team was able to engage the Toshao of Campbelltown Mrs Marbel Thomas and discussed the impact the gold rush has on the village as well as the measures they will be implementing to ensure the safety of residents and miners amid the COVID-19 pandemic.

The data and stories collected from this activity will be instrumental in planning future Amazonia 2.0 field activities and in evidence-based advocacy by these communities.